At the End of the Rainbow

The first time my husband and I went on a geocaching hike in the mountains, I thought, "Wouldn't it be fun to work this into a story?" Hmm. It could be a murder mystery, with various clues found in different caches. But, you know, I don't write mysteries, so that wouldn't work. So . . . romance. A romance with geocaches. Sure, why not? 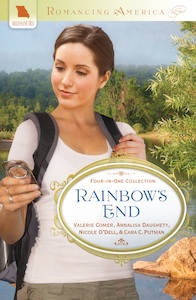 When a friend and I started brainstorming a novella collection for proposal to Barbour Publishing in January, 2011, the idea I'd ignored for several years percolated to the top of my mind. Thankfully, Nicole was intrigued and thought it sounded fun. In a day or two we had the basic premise for the anthology worked out and found two other authors to join our team.

What if--what if a church decided to host a geocaching hunt as a summer-long outreach event? What if the whole thing was set up to remind participants that the treasure most of us seek is temporary, but there is treasure that will last into eternity?

We set up a few ground rules for the Rainbow's End Treasure Hunt (because everyone knows a pot of gold is found at the end of the rainbow), and figured out what roles all of our romance heroines and heroes would play.

I chose to write about Lyssa Quinn, the event's reluctant volunteer coordinator. She's a woman who's bold about telling people why drinking soda is bad for them, but shies away from sharing her faith lest she be ridiculed. Juxtaposed in the story is Kirk Kennedy, Lyssa's former humanities professor who used to make fun of Christians in class--not that he ever knew she was one. Now managing his brother's startup electronics retail outlet for the summer, he's in a position to sponsor the Rainbow's End hunt. That is, if he doesn't laugh Lyssa clear out of the store first.

Barbour decided our proposal was worthy of purchase, which made me completely giddy. I'd been writing for nine years, with nine complete novels, before making my first pro sale! The interim from February 2011 to May 2012 has seemed like eternity, but here it is, and with it, Rainbow's End is finally for sale to the public. My novella "Topaz Treasure" is the first of the four as it sets the scene.

Are you curious about geocaching? Drawn to boldness? Interested in eternal treasure? You'll find all those things at Rainbow's End . . . with a side helping of romance. 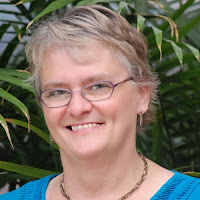 Valerie Comer's life on a small farm in western Canada provides the seed for stories of contemporary inspirational romance. Like many of her characters, Valerie grows much of her own food and is active in the local food movement as well as her church. She only hopes her imaginary friends enjoy their happily ever afters as much as she does hers, gardening and geocaching with her husband, adult kids, and adorable granddaughters. Check out her website and blog at http://valeriecomer.com.

Daily, I receive e-mails requesting help in all aspects of the publishing industry. While I try to help as much as I can, I also need to provide income for our family, so I offer a few hours each month for mentoring and consultations. I keep my prices low and my schedule flexible to fit your needs.

Some of the areas I can help you with include:

Starting Your Own Publishing Company

If you are interested in hiring me as your consultant or mentor for general knowledge or for a specific project, send me an e-mail and we'll get started. I am available by e-mail or by phone, whichever you prefer. I can customize a specific plan of action based on your scheduling needs and on your budget, so let's get started today!

on May 02, 2012 No comments:
Email ThisBlogThis!Share to TwitterShare to FacebookShare to Pinterest
Newer Posts Older Posts Home
Subscribe to: Posts (Atom)