We're thrilled to share a new release for middle graders today in an interview with author Eddie Jones.

Eddie, please tell us about your upcoming release, Dead Man's Hand, with Zondervan. 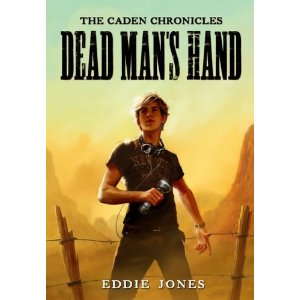 First, it’s a fun, fast read aimed for middle school boys, but we’re also getting nice reviews on Goodreads from teachers and mothers. But my aim is to give boys a book they can enjoy, one taps into today’s fascination with the occult. This is the first book in the Caden Chronicles series and each story involves one element of the supernatural. Book one explores the concept of ghosts, spirits and what happens to our souls when we die.

Zonderkidz is a Christian publisher, so the paranormal aspect is surprising.

I added the paranormal aspect because I want parents and youth to struggle with eternal questions. We’ve created such a culture of blood-letting through books and movies involving vampires, zombies and survival contests, that the reality of death doesn’t carry the sting it once did. In high school my youngest son lost several friends to driving accidents. When another friend recently died, we asked how he felt and he replied, “I’m numb to it.” I fear that’s what we’re doing with our youth: desensitizing them to the horrors of death. In Dead Man’s Hand, Nick and his family discuss spirits and ghosts and the afterlife because I think it’s important for teens to wrestle with these questions before they’re tossed from a car and found dead on a slab of wet pavement.


You're passionate about getting boys interested in books. Why do you feel it's so important to get boys reading fiction at an early age?

I fear we’re on the verge of losing the male reader. I don’t mean men and boys won’t learn to read: they will. But the percentage male who read for leisure continues to shrink and this could be devastating for our country. We can’t lose half our population and expect America to compete on a global level. Reading forces the mind to create. With video the scene and characters are received passively by the brain. There is very little interaction; it’s all virtual stimulation, which is different from creation. When you read, you add your furniture to the scene, dress the characters, add elements not mentioned by the author. This is why readers so often complain, “the movie was nothing like the book.” It’s not, because the book is your book. The author crafted the outline of the set but each reader brings their emotions and expectations to that book, changing it forever.

In general, boys would rather get their information and entertainment visually. This is one reason books have such a tough time competing for male readers. It can take weeks to read a book, even one as short as Dead Man’s Hand. Meantime, that same story can be shown as a movie in under two hours. So in one sense the allure of visual gratification is robbing future generations of our ability to solve problems. I believe Americans only posses one true gift, creativity, and it’s a gift from God. Other nations build things cheaper and with fewer flaws. They work longer hours for less pay. But the thing that has always set America apart is our Yankee ingenuity. We have always been able to solve our way out of problems. That comes directly from our ability to create solutions to problems we didn’t anticipate. If we lose male readers and fail to develop that creative connections necessary for the brain to conceive of alternatives, then we will lose our position as the world’s leader.

What advice would you offer to parents to get their children interested in reading at a young age?

Watch for clues. If your child shows any interest in reading, reward the activity with trips to book fairs. I remember in grade school how excited I got when we were allowed to order books. All we had to do was check a box, (or so I thought), and wham! A few weeks later boxes of books showed up and the teacher began dealing them to the students. I didn’t learn until later my parents had mailed the school money for those books. I still have most of them.

But not all children like reading and you can create an anti-reading environment if you push too hard. An alternative for boys are comic books, graphic novels, or simply cartoon books. I read a lot of Charlie Brown cartoon books and still remember the plot: Lucy has the football. Charlie wants to kick the ball. Lucy promises she will hold the ball in place but at the last moment… We know this story because it’s repeated, not in a novel, but in a cartoon.


You're writing for children right now with Zondervan. Besides the upcoming Cadence Chronicles Series, what are your dreams for your writing future?

Each day I walk around my yard reciting the Lord’s Prayer. This is my conversational time with God. Part of that prayer time is me putting on the armor of God. When I’m about halfway fitted out I say, “Lord place across my chest your breastplate of righteousness that my thought may be pure, honorable and good and my dreams secure: my dreams of sailing around the Caribbean, writing a best selling novel and surfing reef breaks.” Beyond that I don’t have any grand writing goals. 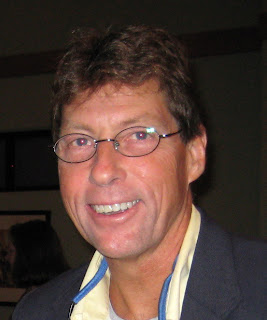 About the Author: Eddie Jones is the author of eleven books and over 100 articles. He also serves as Acquisition Editor for Lighthouse Publishing of the Carolinas. He is a three-time winner of the Delaware Christian Writers' Conference, and his YA novel, The Curse of Captain LaFoote, won the 2012 Moonbeam Children's Book Award and 2011 Selah Award in Young Adult Fiction. He is also a writing instructor and cofounder of Christian Devotions Ministries. His He Said, She Said devotional column appears on ChristianDevotions.US. His humorous romantic suspense, Bahama Breeze remains a "blessed seller." When he's not writing or teaching at writers' conferences, Eddie can be found surfing in Costa Rica or some other tropical locale.