#LeapFrogs on the Move: Kemah, Houston, and Wharton 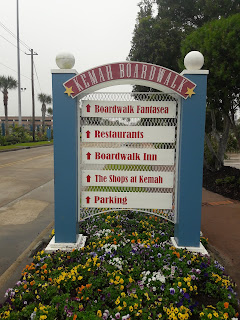 I've decided to start blogging five days a week for awhile, so I can include more photos and share more of our journey.

After Fort Anahuac, I picked Kemah, Texas for our next on-the-way stop because I began writing a script a few years ago and my character landed on the Boardwalk there. I’d never heard of it before writing and researching for the script, but I ended up falling in love with the place. I wanted to see if my imagination – and Google Earth – had given me a good representation of the area.

Kemah is located diagonally opposite of Anahuac (our previous stop) on Trinity Bay. We arrived early morning, before the Boardwalk opened at noon, so we were able to see the buildings and layout instead of throngs of people. A light misty rain started as we parked.

The businesses and residences in the surrounding blocks all had that beachy, tropical look – something that made me want to stay for a while. I even picked out the perfect house! (apologies to the owner for posting the photo, but your home is too lovely not to share.) 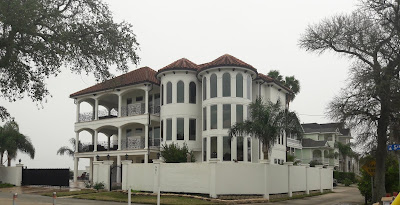 The one thing that surprised me about the boardwalk was the ginormous rollercoaster. I’m not sure if it was new since Google last visited, or if I just missed it in all my research. I love the Dahlonega Mine Train at Six Flags and the Alpha and Omega and Disney, but that’s the extent of my roller coaster bravery, so I may not have paid it much attention. But in person, you sure can’t miss it!

I loved the marina next to the boardwalk, too, with all the sleek sailboats and beautiful yachts.

We were still trying to outrun the cold and rain (and you can tell from the photos we're not there yet!), so we didn’t stay at Kemah long before we hit the road again. (The next morning, I saw Kemah’s temperature was 31 degrees. It had been 55 when we were there.)

We had originally planned to go into Houston to visit a family member, but plans changed so we just hit the outskirts. When Texans tell you how big that city is, believe them. We got on Hwy 80 on the east side and seemed to drive all day long. Eventually we saw a “leaving Houston City Limits” sign. An hour later, we saw another one.

We drove toward a free camping spot near Wharton, Texas. The whole drive, the name of the town bugged me, because I felt I wasn't pronouncing it properly. When I tried to say it one way, it came out "Horton" but I knew that wasn't right. When I really tried to sound it with the "Whar" sound, it just garbled.

Before going to the camp site, we stopped in town so I could introduce Tim to some Texas barbecue. I’d done some research online at some point and found that Hinze’s BBQ had been in business since the 1970s and knew their stuff. The beef brisket was calling my name.

On the way, we spotted the coolest place – if my budget would have allowed, we’d have stayed at the TeePee Motel that night. What a fun place. They even offered free wifi.

But we kept driving toward the food and Hinze’s BBQ did not disappoint. Tim was instantly at home: two framed images with John Wayne greeted him as we walked to the register. We could tell instantly that the place was truly a local joint because when we walked in, all talk stopped and heads turned. The crowd was all ages, all races, but mostly local, so our arrival seemed to surprise them all.

My order was some of the best beef brisket I’ve ever eaten, two delicious pork ribs, two sides, a slice of onion, a pile of pickles, and a slice of white bread. Tim got chopped beef (he said he’d listen to me and next time get the brisket) and smoked sausage. We ended up trading out sides, but they were all delicious. Blackeyed pea salad (except they looked more like crowder peas or lady peas than blackeyes) that was sweet, vinegary, and with a slight hint of jalapeno, cucumber salad in a light creamy dill dressing, mashed/chopped potatoes mixed with bacon and onion – I was told similar to German potato salad, but I felt it missed that mark – but Tim loved them, so I got his pea salad. And mustard greens – Tim got those, but I could have eaten a pot of them, too. The best part, well, after the brisket, was the price – only $10.50 per plate. I love finding such great food at bargain prices. Tim was already chowing down on his before I could get a picture of both plates. 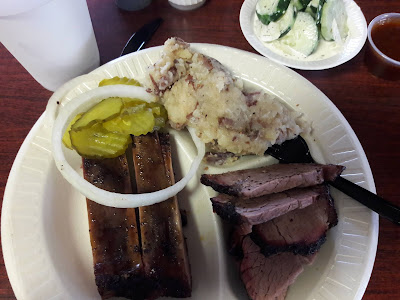 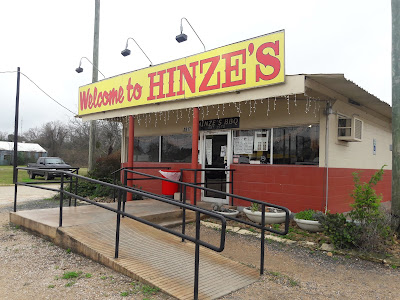 After our tummies were full, we stopped in at a local store down the street, only because of its name: TNT Western Wear. (TNT - Tim N Tracy?) The employees were friendly and beautiful, and fitted Tim for a cowboy hat. Some guys at a rodeo fitted and sold him one several years ago, and he said it never fit right. So these ladies sized him up and proved that the rodeo guys had been wrong. Tim was content to know his correct size and I was relieved he didn't want to break the budget!

While we were there, I also asked them about the pronunciation of the town's name and found out they all pronounce it Warton (or more like Wertn). I feel better. Ha!

Too late in the afternoon, we finally turned toward the free camping site out in the country. Way, way, way out in the country. We drove 10 miles without seeing a car or even a business. On the final turn to the park, we turned onto a dirt road that was all washboard. It seemed treacherous, and with the coming storm, we were afraid the road would wash out and leave us stranded out in the boonies. We weren’t sure how long our cell signal would last, so we decided to get out of there and head toward Victoria, but our camping destination still unknown at that point.

The countryside was gorgeous, and I have a tremendous amount of respect for the farmers who have worked that land for generations. The soil was rich, and the vastness of it all went on as far as the eye could see in every direction.

I took a couple of panorama shots on either side of the car from the same location, trying to capture the vastness of it all. (And again, you can see just how dreary the day was.)

Just before we got to Victoria, our tire sensor light flashed on and off a few times, so we decided to go into the town and have our tires check. Walmart Auto Center was almost ready to close, but they pulled us in and aired up our tires, told us which one was low, and sent us on our way.

By this time, it was dark. We’d passed a rest stop a few miles back, so we checked online, learned that overnights were okay, so we went back there and car camped for the night.

But the next morning, we had some decisions to make.

#LeapFrogs on the Road: Fort Anahuac TexasTechnology on the Road
Crossing Louisiana
From Alabama through Mississippi
First Leg of our #LeapFrog Journey
Preparing for Camping on a Long Road Trip
The Beginning of a Dream Realized

What a full day! You are really packing in the sights and experiences. I'm enjoying your blog. Safe travels!

Thanks for reading, Suzy!