#LeapFrogs: Change of Terrain and a Midnight Visitor

We've been in Texas a long time, and once we got west of Austin, the terrain became flat and sage-brushy. As we left San Angelo and El Dorado, the terrain was still the same, but somewhere along US-190, the horizon changed dramatically. I almost wrecked the car wanting to get a picture before it was too late. 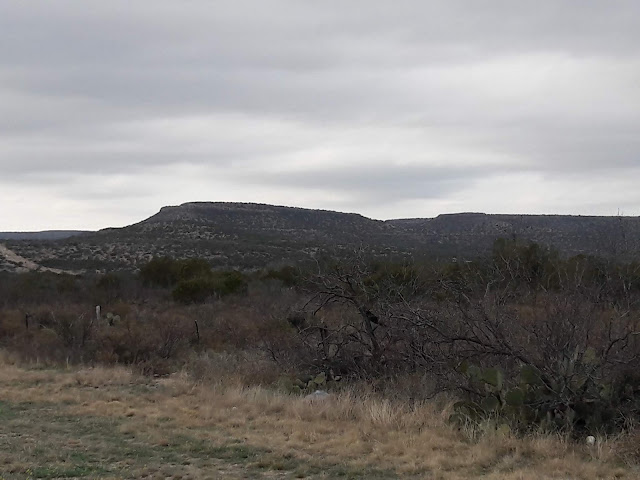 We'd never seen mesas before, and apparently, the state of Texas knew that, because almost immediately we found a picnic area where we could pull over safely to snap a few pictures. (Notice the clouds - still no sunshine!)

Unfortunately, that picnic area was loaded with drug paraphernalia so we moved on.

We'd found an overnight rest stop on freecampsites.net, so we headed toward I-10 in Iraan. The town is actually off the interstate a few miles, but we didn't realize that until we'd passed through and reached the interstate. It was still early, so we decided to gas up the car before settling in for the night - but there were no gas stations at that exit. So we drove to the next town - going east toward Sheffield, which seemed to be pretty much a ghost town. We noticed residents getting into their car on the main road we were driving, so I rolled down my window and asked for the nearest gas station. She told me it was in Iraan - 18 miles away!

Supply and demand pricing greeted us in our second visit to Iraan - gas was almost $3 per gallon - the highest price we've seen yet.

When we finally got back to the rest area, we were delighted to find this beautiful mesa as our view. 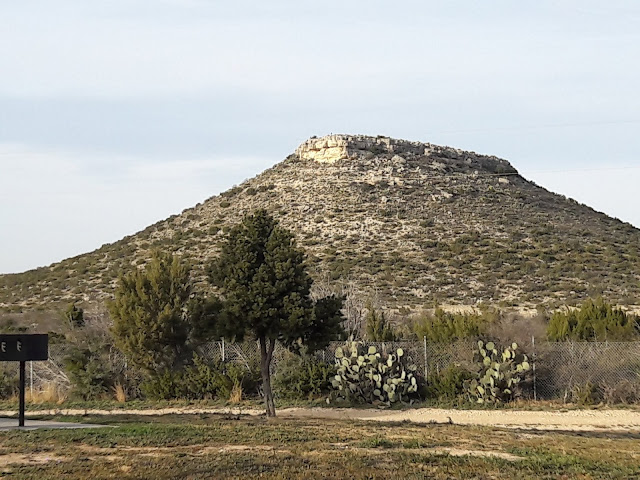 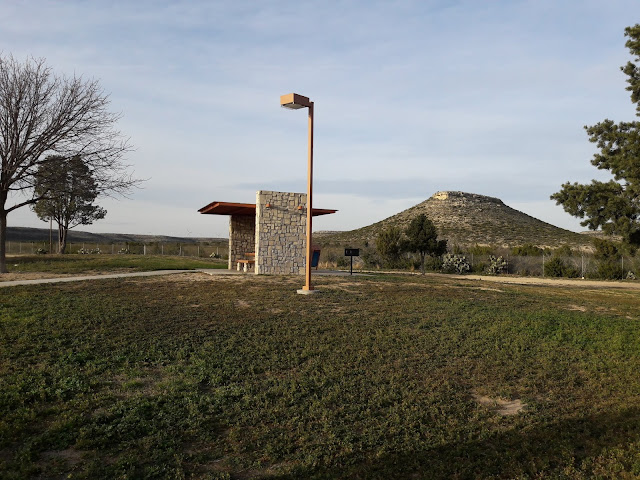 We cooked dinner then settled in for the night. The rest area wasn't very busy, so it was a peaceful night.

Around midnight, Tim woke up and planned to used the restroom. He looked outside and decided to wait. A skunk was roaming around the grounds, sniffing at light poles and trash cans and car tires. Tim watched him for about an hour, then dozed off again.

I knew nothing about the skunk when I woke up at six and made my own trip to the restroom. Tim told me about it when I got back - I'm thankful I didn't discover it on my own!

We'd gotten a note from a friend overnight, telling us to check out Odessa, so we headed there next.

On the way, we went through the small town of McCamey and found this beautiful tribute. 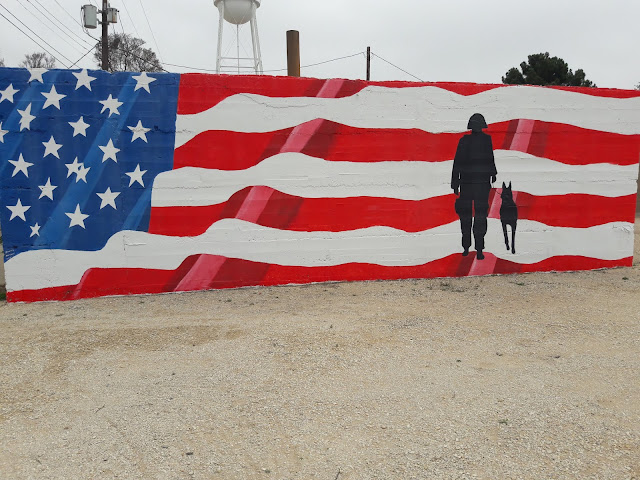 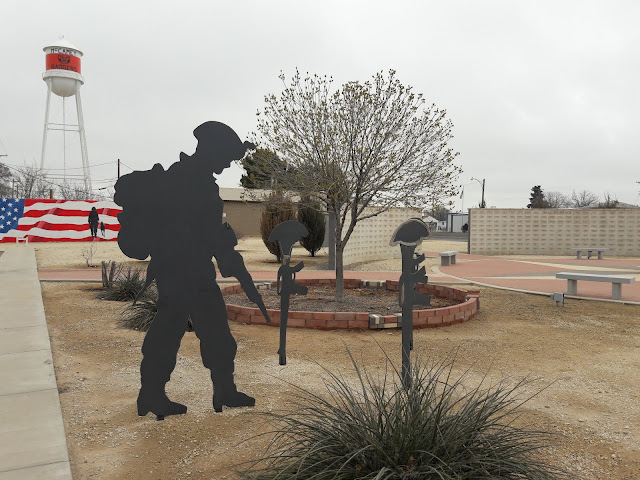 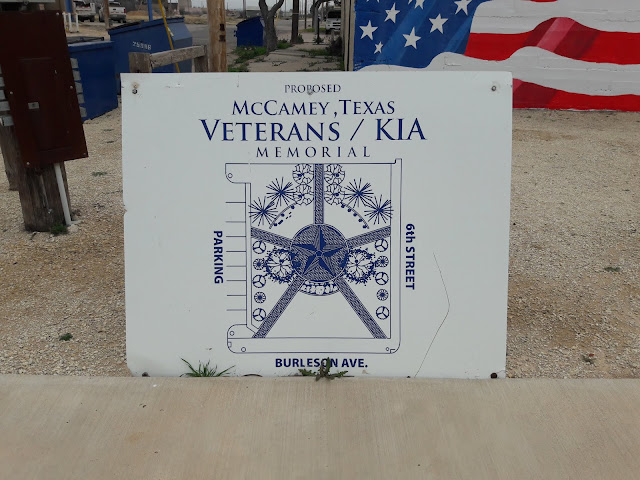 Further down the road, I had to stop to shoot this one: 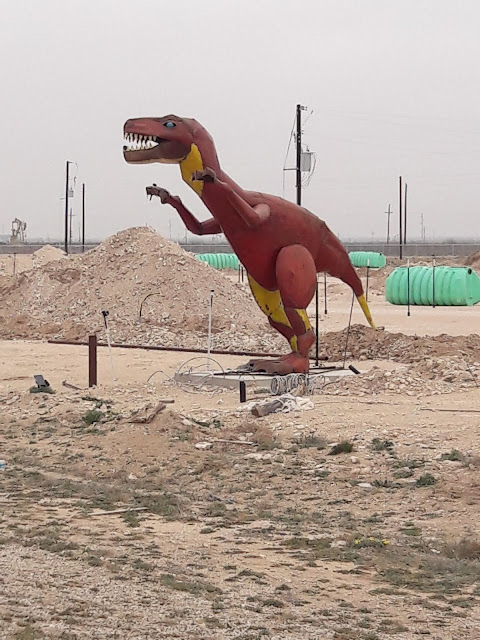 We weren't sure what awaited us in Odessa. My friend had told us to check out the Shakespeare Theater at the school, but that's all the information I had, so during a pit stop, I searched for other "must-sees" and learned about the Chris Kyle memorial.

The theater was closed when we arrived, so I could only snap photos from outside the gate. 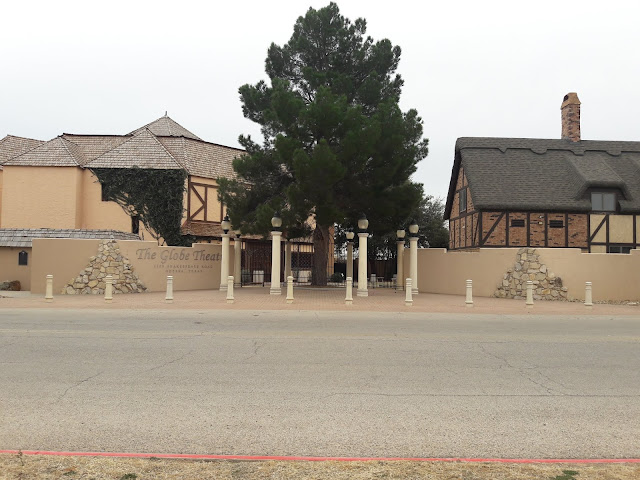 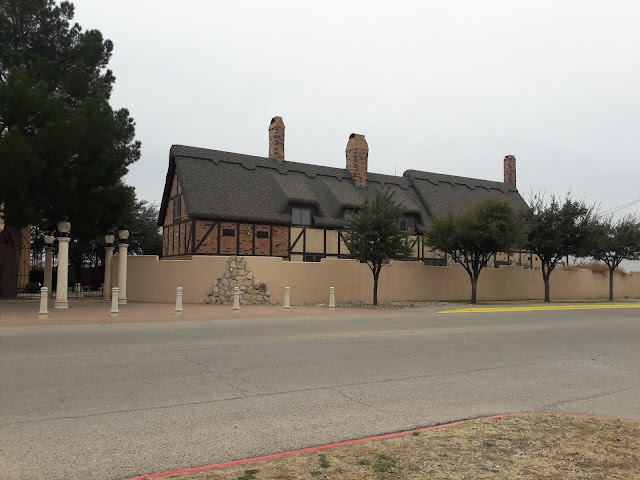 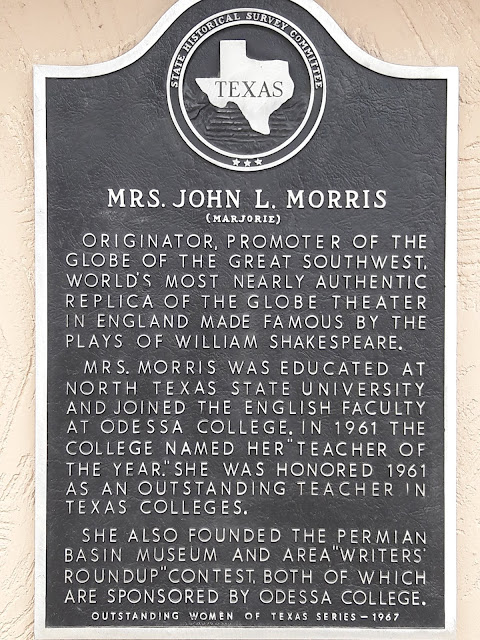 The Chris Kyle memorial was a little harder to find because it what first appears to be a rather odd location - in a busy retail location - but then when I saw the VA hospital right next door, it made more sense.

If you're wondering who Chris Kyle is, watch the movie American Sniper - he was a Navy SEAL and an American hero. 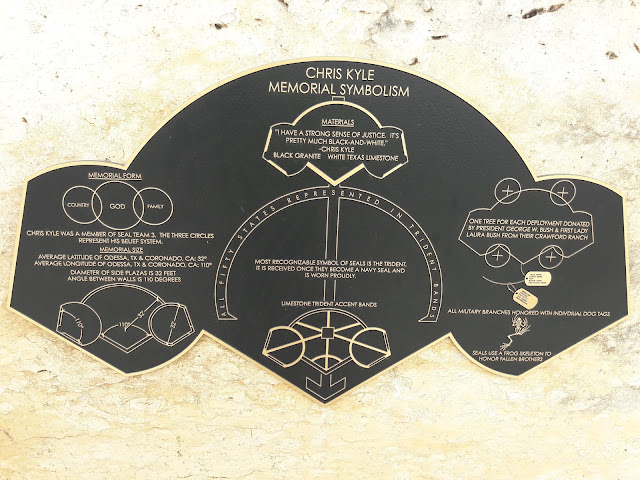 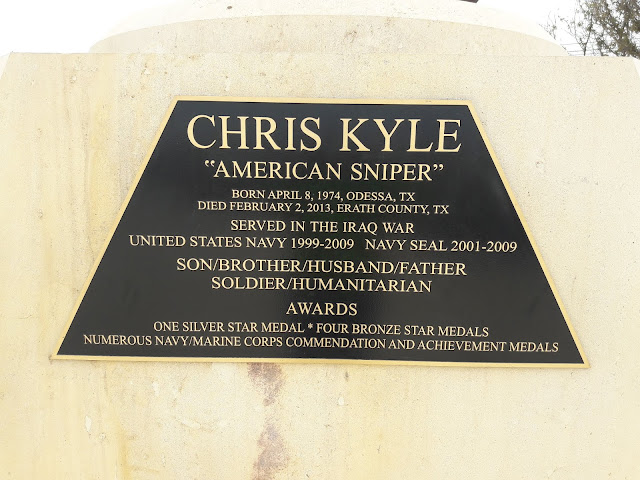 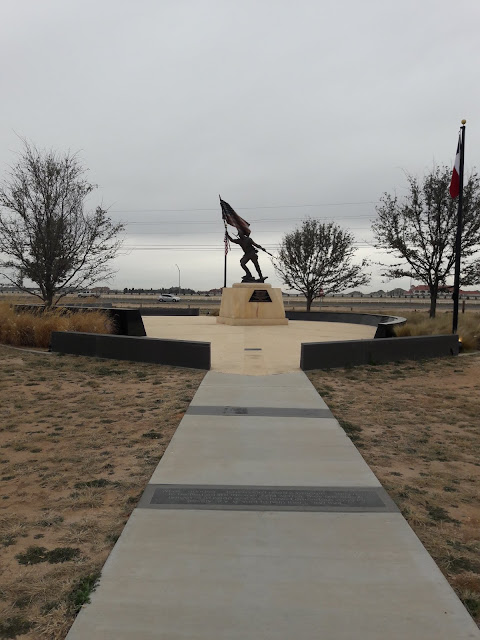 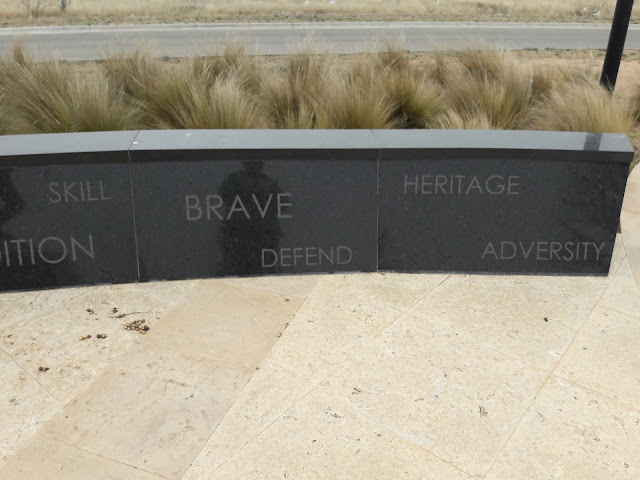 The first word I used to describe this memorial to my son was "intelligent" - it's a thought-provoking, thoughtful, intelligent site. 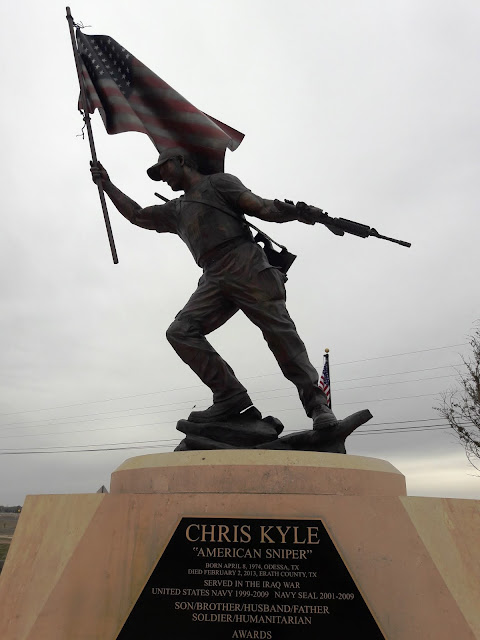 Our final stop in Odessa was a fun break. 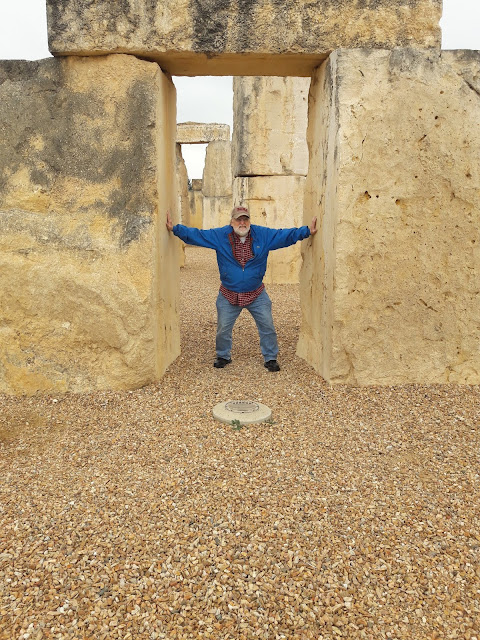 The Texas Stonehenge! (And my very own Samson!) 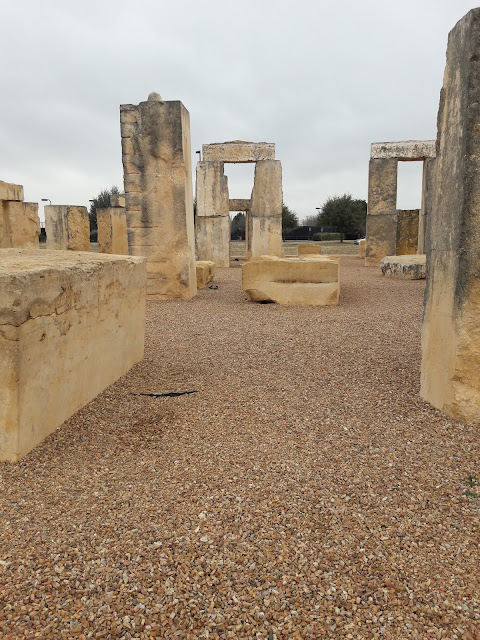 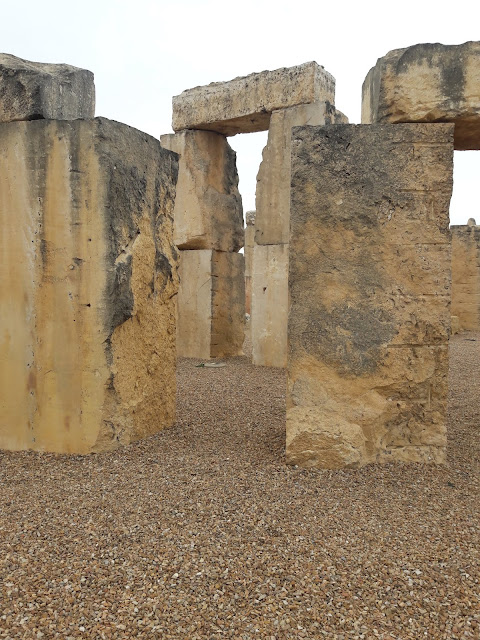 Tomorrow, we hit the road again for another crazy schedule.