After such a beautiful day in Arizona, it's hard to believe we were still trying to get ahead of the weather. Snow and cold were barreling down on us, so we were trying to get east first, and then south, so we'd cover more unexplored territory yet get us closer to home base.

We stuck to the interstate after we left the Painted Desert, and just kept pushing. A loved one gifted us with a night's hotel stay and dinner, so I made reservations (again through Hotwire), for a hotel in Albuquerque. We arrived  around 8 p.m. bone weary after driving for almost 400 miles. But when we pulled into the hotel parking lot, we sat at full alert.

The smell of pot and meth almost knocked me over. The clerk was spaced out and could hardly function. Because we were both so tired, I went ahead and checked in and got our key. I asked who delivered food, and he shrugged and pointed out the window, drawing out, "Denny's?" like he was asking me. I also asked when breakfast was served and he said, "No breakfast."

Tim and I decided to go to Denny's before we lugged stuff to our room on the 3rd floor. As we walked across the lot, some guy in a pickup truck was calling out to a woman standing on the hotel's sidewalk. I didn't pay attention to their conversation at first, but then he said, "$50? Okay, be at my room in 1/2 hour."

After we ate (attentive and hilarious server - he's been with the company 19 years!), we grabbed our backpacks and found our room. I went to the bathroom and flicked on a switch. The light fixtures in both the bathroom and the sink area blinked on and off. Intent on using the facilities, I didn't think anything of it at first, but noticed the room had no toilet paper. Thankfully, I noticed ahead of time.

There was also only one towel in the room.

When I tried the other light switch next to the first one, the lights again blinked, but this time, something sizzled. I quickly turned them both off.

I went to the phone - Tim was still standing by the door, backpack in hand. I think he was already escaping the place in his mind. When I picked up the phone, I discovered noisy static. I dialed '0' anyway, and heard the clerk pickup, but could not hear a word he said, and couldn't even hear myself speak because of all the static.

I called Hotwire while still in the room.

I explained the entire situation - no breakfast (which was advertised), the sizzling wires, no toilet paper, the meth/pot smell, and the parking lot characters, etc. He put me on hold for several minutes, and when he came back said that the hotel had confirmed that they did not offer breakfast like advertised (no one was concerned about sizzling wires!), so they would refund my money. But it would take several days for it to be returned. He gave me a confirmation number for the refund, and we hung up.

We left the parking lot so frazzled, so tired, and without another plan, so we just kept moving east. We ended up car camping at a rest area between Albuquerque and Santa Rosa.

We made a quick stop in Amarillo, for one specific purpose: Cadillac Ranch. 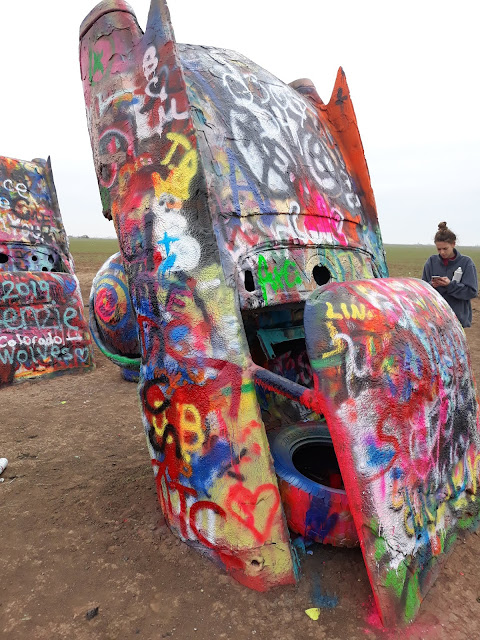 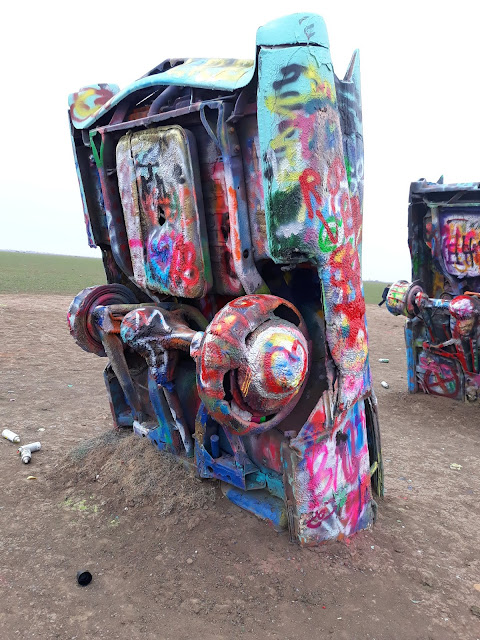 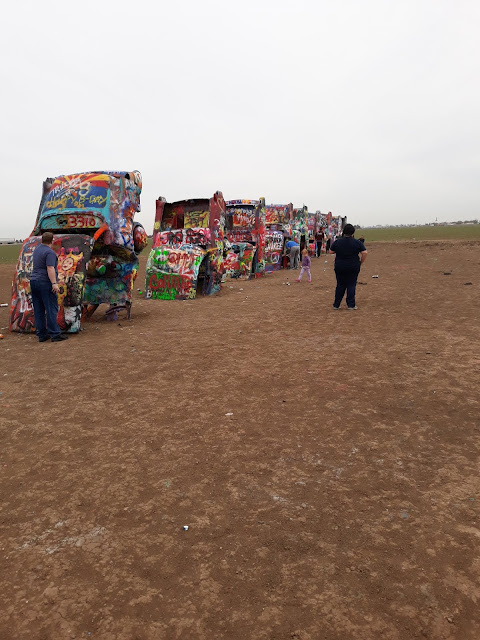 From Amarillo, we drove to El Reno, to head south through Oklahoma on Hwy 81. In El Reno, we met a very kind couple who invited us to share their table in a crowded diner. We learned they cotton-farmed 1,000 acres and his wife was a school teacher. They are the heart of our beautiful America, and it was such an honor and delight to visit with them.

This Oklahoma route was personal - years ago in another life, I lived there, and my children grew up there. We haven't been back in 24 years, so this part of the trip was a bit emotional for me, as I showed Tim farms and businesses I used to own, and the hospital where my younger son was born, the schools my older son attended, the house we lived in before we moved back to GA. Memories flooded my heart as we moved from town to town.

We made the decision to cut through Arkansas instead of Texas to get back to my Mom's house, where we planned to stay a few weeks to work, schedule, plan, visit doctors, etc. We stopped for the night in Broken Bow, Oklahoma, thanks to the gift of another loved one (money from the first fiasco was still tied up with Hotwire.)

I mention Broken Bow for two reasons. The Microtel we stayed in there had a very sweet desk clerk. We asked her for some food recommendations, and she told us about a convenience store down the street. I laughed and asked why she'd recommend a convenience store. She said it was her favorite place, some of the best country cooking, and great prices.

We went to our room (with a huge smoky mirror the length of an entire wall - sort of creepy!) and finally, growling stomachs sent me to get our dinner at Bunch's Convenience Store. Along with everyone else in town!

The store was basically gutted of regular convenience store shelving (the coolers were still there, and a couple of small shelves of snacks to one side). A large hot bar stood along one wall, manned by several busy workers. Several tables were around for anyone choosing to dine in, but most everyone was taking their food to go. The menu was basically a meat-n-two option - choose one main entree, and two sides to go with it, plus a choice of cornbread or hot rolls to go with it. The entrees changed daily, but that day included fried chicken, chicken tenders, goulash, fried fish, chicken fried steak, ribs, and Indian tacos. Sides included potatoes served several different ways, fried okra, mac & cheese, greens, corn, green beans, coleslaw, and baked beans. The selection was great, and the price even better - only $6.29 a plate! But the food went fast. I was stunned at how busy they were, and took my time ordering - letting a couple of people go ahead of me. By the time I was ready to order, the fish and chicken fried steak were already wiped out. The food was great and homemade. Definitely a must stop if you're in the area.