Sad as we were to leave Ann and Stan in Wilmington, we had to keep moving.

I'd managed to make reservations in the Outer Banks, but we were still five hours away (Google time; eight hours the way we travel). I found a campsite in between, in the Croatan National Forest, for only $5 per night, using Tim's lifetime National Park Pass.

Oyster Point had 15 campsites, but only a couple were taken when we arrived. We chose the first one, because it was next to the bathhouse, but it was actually too close, and the site was swarming with flies, so we moved down a few spaces and didn't have any problems. Every campsite had huge stacks of firewood to use, free of charge. Extremely rare - but what a treat. 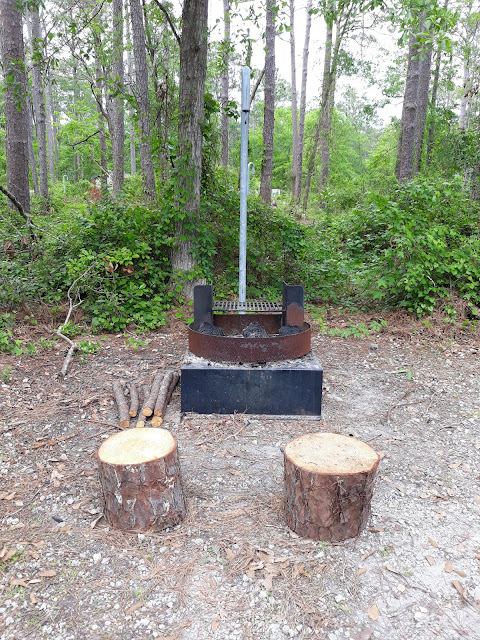 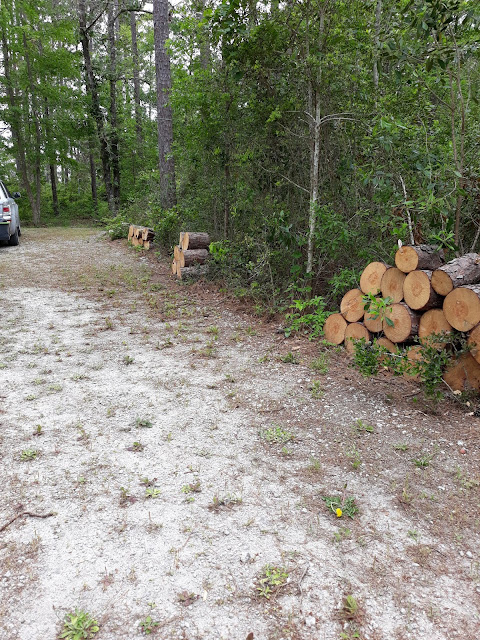 From Oyster Point, we explored the towns of Havelock, Morehead City, and Beaufort. 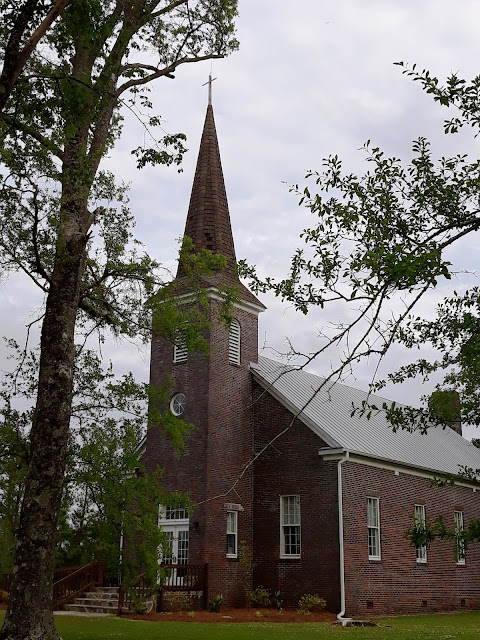 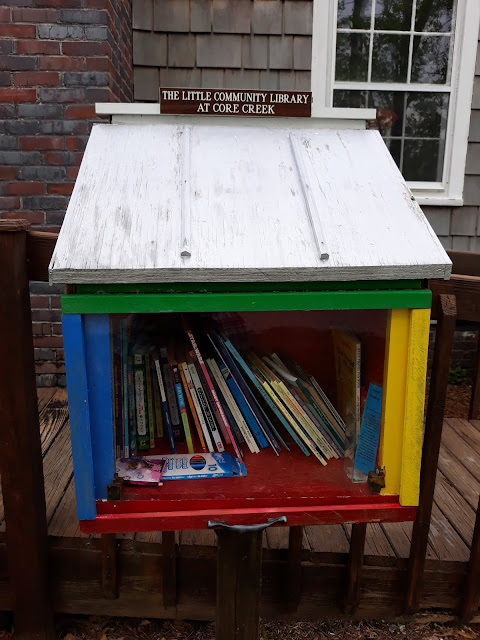 Rain moved in while we were camped at Oyster Point, so we spent time relaxing, too. 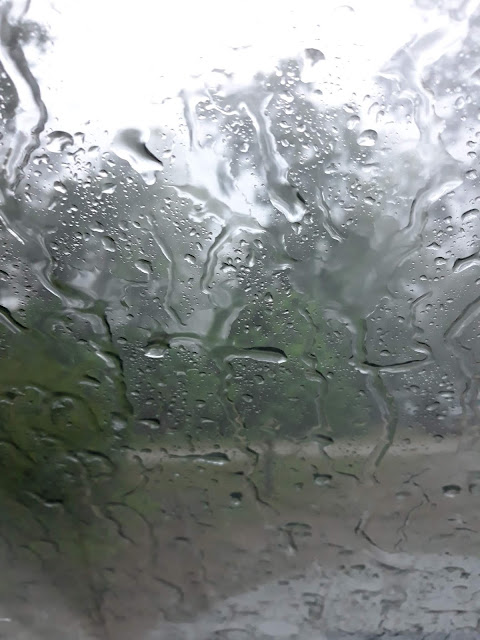 The day before we left, the camp host arrived and we learned that the campground had been closed for a long time, due to hurricane clean-up, and had just re-opened the day before we arrived. She'd been on a family vacation when they decided to reopen the camp, so they told her to report for duty after the vacation. She said the clean up crews put all the firewood out at the campsites.

Finally, we were on our way to Ocracoke!

We'd debated for several weeks whether to stay at the beach, but now, after the fact, we laugh at our fears. There was nothing to fear. The winds of Texas that took out our first tent were much more severe than coastal winds. And at the Ocracoke campground, the massive sand dunes provided the wind block so it felt like any other camp site.

We'd read all the information on the recreation.gov website, so we knew to bring sand stakes. We also knew that there was no shade in the campground at all, so we purchased a screen tent that we hoped would provide a little relief. Zach had also given us a smaller screen tent when we were still in GA, and knew that would be perfect for the beach.

To get to Ocracoke, we had to take a ferry. There are several ferries that service the island from different locations. Since we were on the south end going north, we decided to take the ferry from Cedar Island, with a fee of $15 per vehicle (under 20' in length).

A car ferry was a totally new experience for both of us, and I was giddy as a little kid! They packed approximately 41 vehicles on our ferry, including one massive tour bus loaded with passengers, several RVs, and even a pickup pulling a large boat. The trip took two hours. 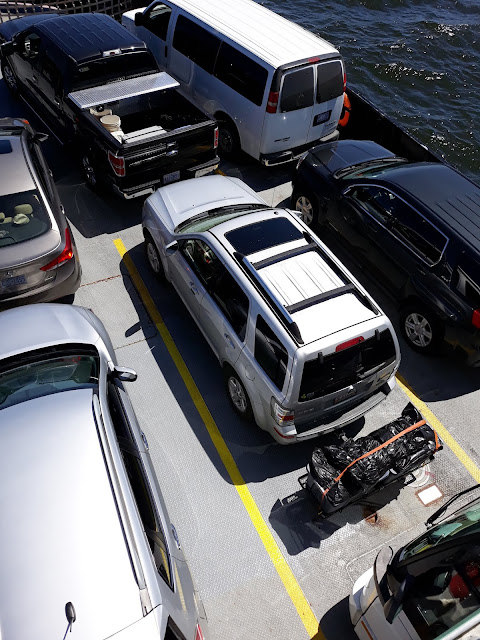 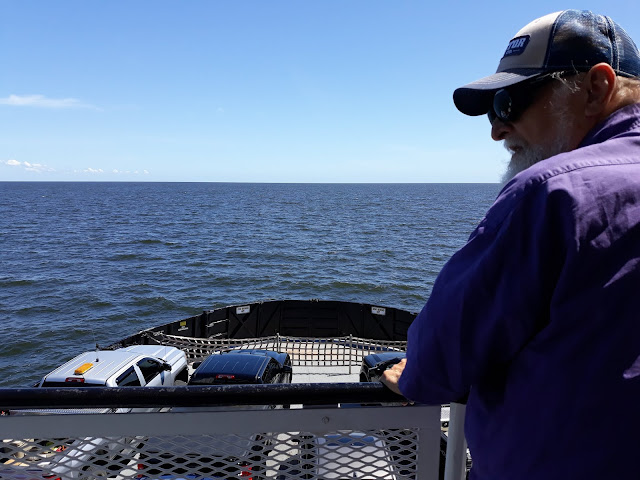 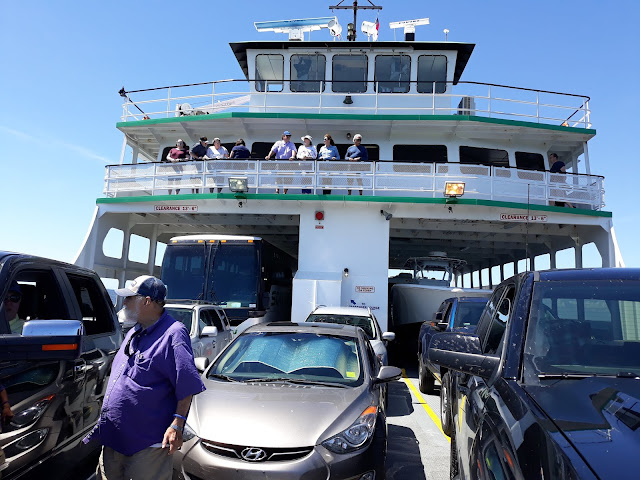 We drove through the little town of Ocracoke toward the campground about 3 miles outside of town. The campground is part of the National Park Service, so we were able to stay for $14 per night! At the beach!

The campsite listing had said "new modern restrooms" and "cold showers." Notice the "and" instead of "with." That's an important distinction.

The new modern restrooms were great. Flushing toilets, nice sinks and mirrors, a water fountain outside, with a place to also fill water bottles. (The faucet even had a meter telling us how much waste we'd prevented by refilling instead of buying more water bottles.)

The cold showers, on the other hand: 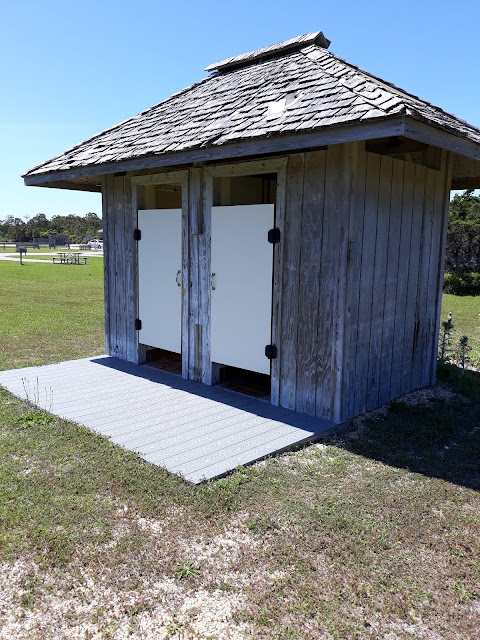 The showers need major updates. The shower stalls were in the middle of each camping loop, just in the wide open. When I walked over to take my first and only shower there, one of the other campers happened to be walking his dog nearby. He saw me headed for toward this building and said, "You're one mighty brave woman." Uh, yeah. 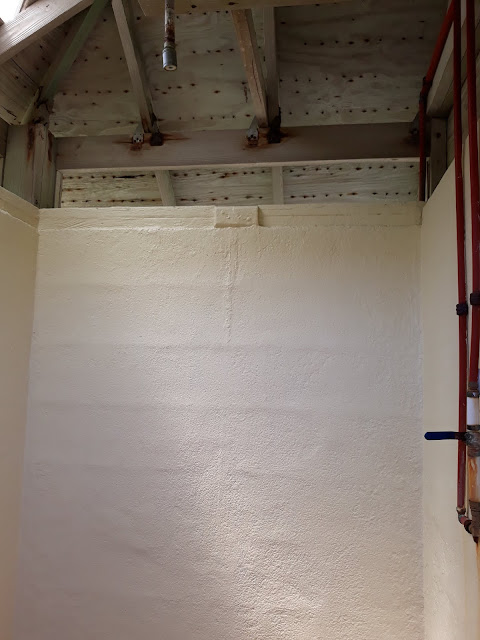 This picture actually does the showers justice - I forgot to take one of the floor. Those are the walls inside the doors, and that's the switch to turn on the showerhead way above. Yes, only cold water.

But it was just one awful shower in exchange for all of this: 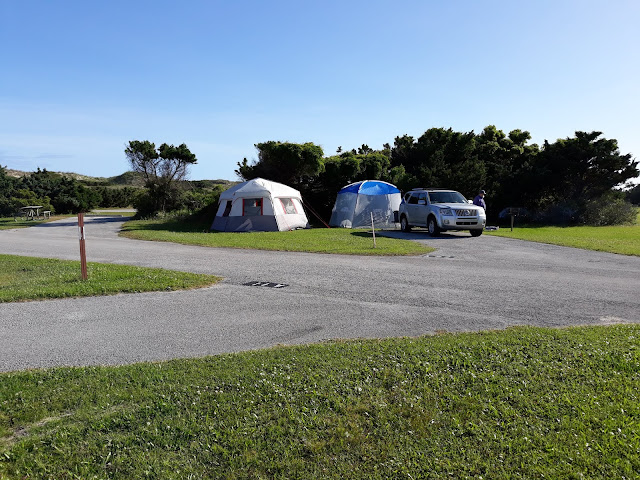 We found the only speck of shade in the whole campground and since the site was empty, we claimed it. Shade graced us for a couple of hours each day, but we were grateful for every second! 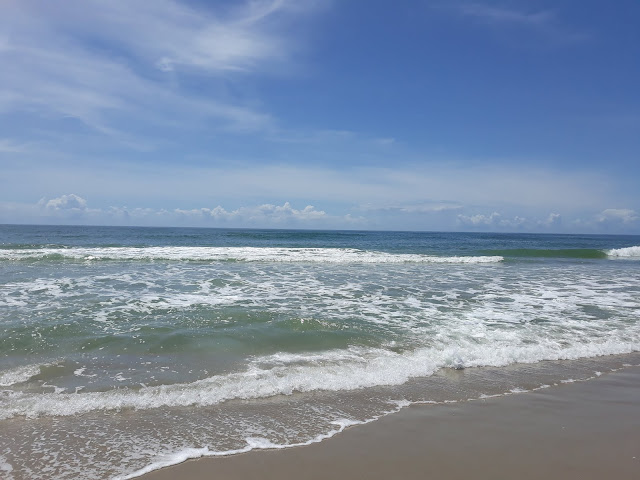 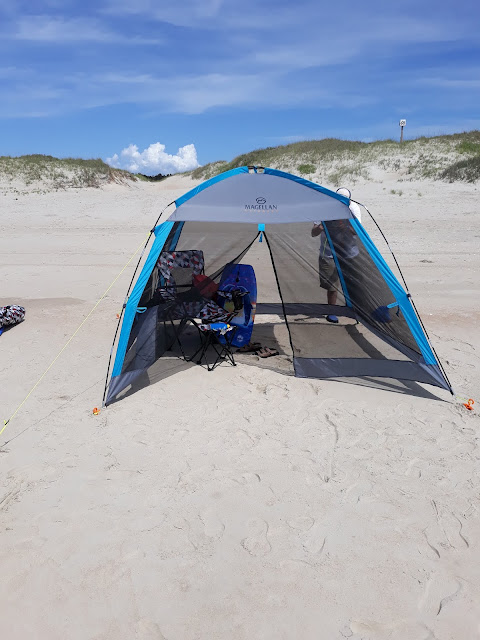 This little screened tent was PERFECT for the beach. Easy set up and it kept us from getting too much sun, even though we were out there several hours.

I could live in that spot forever. The beach is indeed my happiest of places.

Although the temps were perfect, the water temps were still too cold to go in. But we were prepared if they ever warmed up. 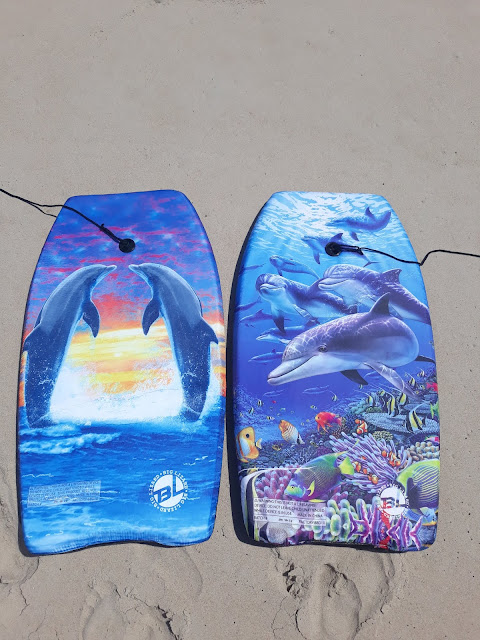 The town of Ocracoke was everything you want in a beach town - restaurants, shops, historical buildings, ice cream, and just overall ambiance. 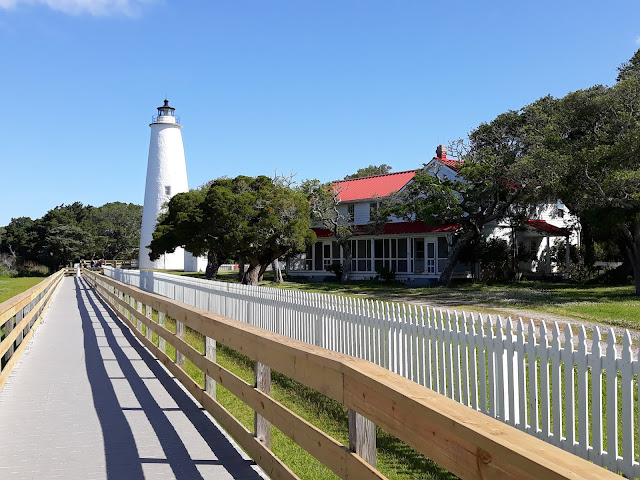 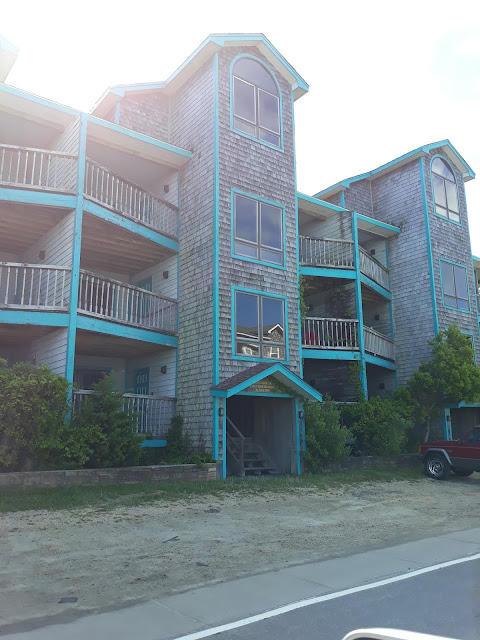 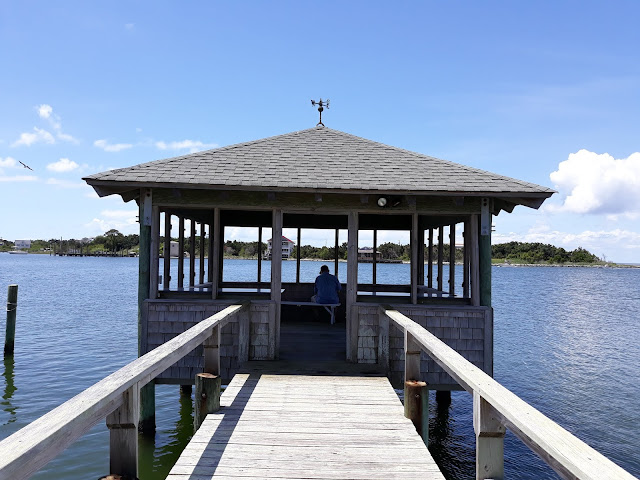 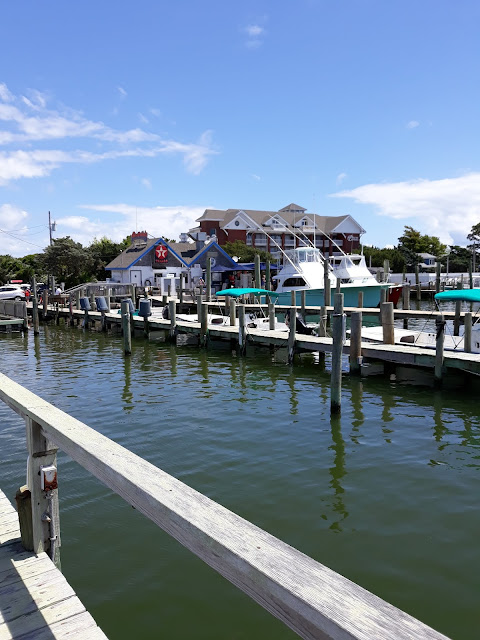 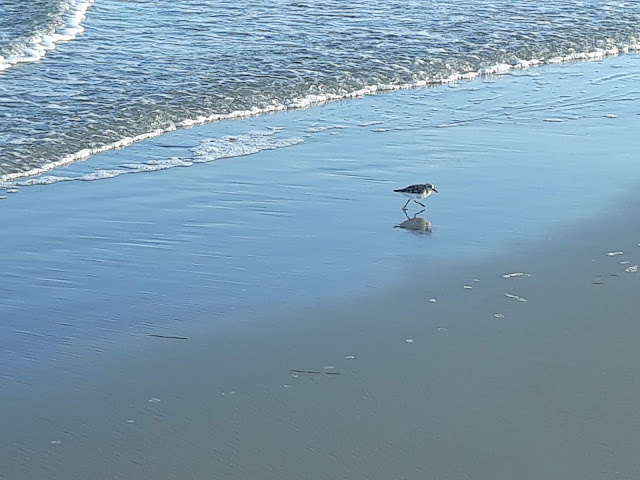 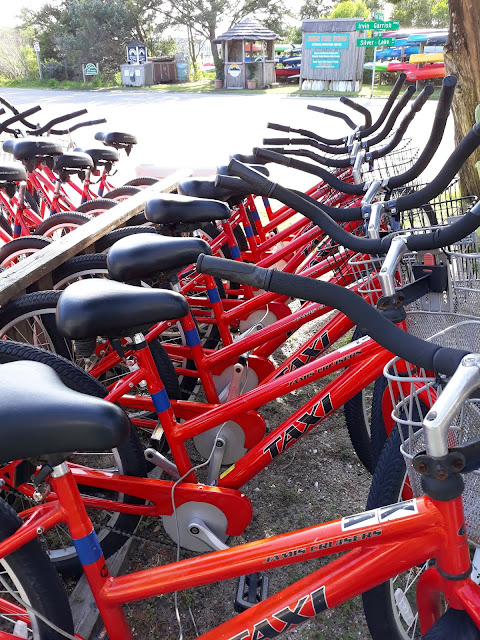 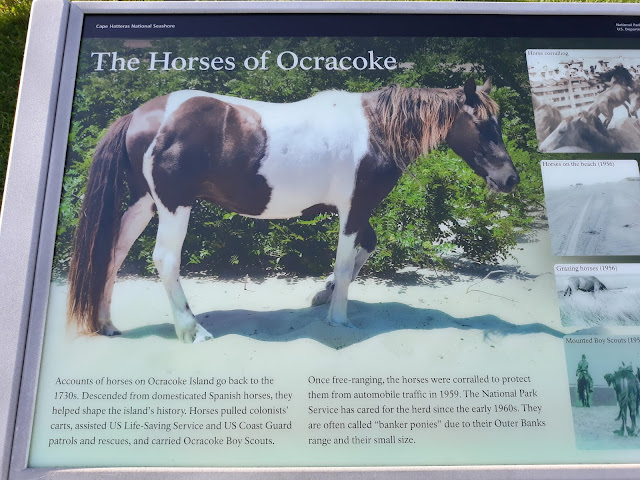 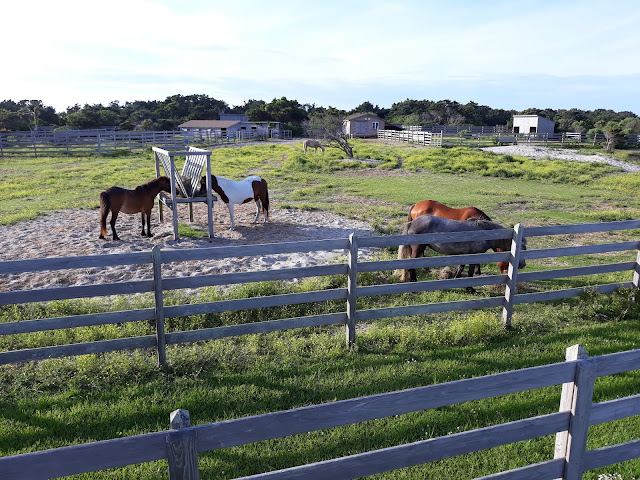 I took so many more photos, especially of the ocean, so stayed tuned for those.

Even though we didn't really want to leave Ocracoke, new adventures were calling. We even got up before the sun came up to head out to our next location.